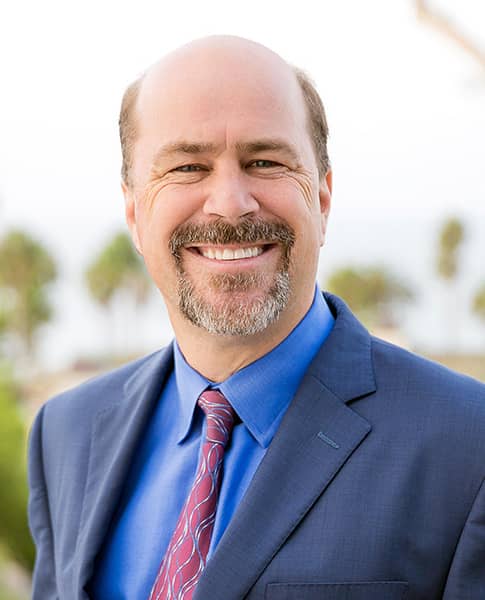 Christopher Aitken was born in Placentia, California on May 10, 1969, is a partner of Aitken Aitken Cohn with nearly 25 years of experience in trial litigation. He is proud to represent plaintiffs in major civil jury trial litigation in the fields of personal injury, insurance bad faith, wrongful death and general business litigation.

Chris is a life-long resident of the OC and currently resides in San Clemente, with his wife Mareen, and their four children.

Chris Aitken is a strong advocate for consumer safety and has successfully litigated and tried numerous civil actions wherein he has obtained numerous seven and eight figure results for his clients. One of his most notable achievements includes a trial judgment on behalf of his client, a 13 year old boy who sustained a severe brain injury in an automobile collision, resulting in a jury verdict of $23,500,000 in Feitler v. E.A. Pedersen Power Products, Peter I. Mr. Aitken recently obtained a $20,000,000 settlement (and estimated over $100,000,000 payout) for an 8 year old boy who suffered a brain injury by falling from a soft contained playground at a prominent fast food chain in B. v. Doe Fast Food Chain. Due to in part to this matter, the food chain is in the process of performing retrofits for consumer safety on all their playgrounds on a national basis.

Mr. Aitken successfully litigated Lieu vs. Disneyland, a case which reached national attention when a metal cleat dislodged from Disneyland’s “Sailing Ship Columbia”, killing a man and seriously injuring his wife. The settlement of this matter was estimated at $25,000,000 by the Los Angeles Times and the case led to major changes in California law regarding the safety of theme parks. Shortly thereafter, Chris Aitken successfully litigated the matter, Torres v. Disneyland, involving a fatality on the Thunder Mountain roller coaster at Disneyland. He has also been involved in other high profile litigation such as Larkin v. Peterson Brothers, a wrongful death matter of a renowned optometrist in Anaheim Hills which resulted in a recovery of over $4,100,000 and heightened County awareness for truck safety and Corbin v. Westbrent Limited, involving the traumatic brain injury of Ryan Corbin, grandson of performing artist, Pat Boone, resulting in a $10,125,000 settlement. His appellate practice is reflected in opinions such as Huie v Southland Sod, which immediately thereafter resulted in a $5,000,000 settlement for the wrongful death of a loving father and husband of two children in an automobile collision.

Most recently, Mr. Aitken has successfully litigated numerous cases. Adam M. v. Doe Industrial Plant resulted in a resolution of $17,500,000 on behalf of a welder who was blamed for his own injuries in an industrial plant explosion. He successfully litigated Christina, Michael and Kathy A. v. Doe Trucking for $6,000,000 unraveling a trucking insurance scheme wherein the Defendant was claiming employees as independent contractors, including the trucking company defendant. Mr. Aitken also resolved Derek P. v. Doe Ambulance Company and Shuttle Med for $1,250,000 representing a paramedic firefighter who was injured in an ambulance performing his duties, struck by another medical transport vehicle.