Have you lost a loved one due to a wrongful act or the negligence of another person? If so, you should speak to an Orange County wrongful death lawyer about the compensation that may be available to you to assist with the unexpected expenses and hardships common in the wake of a loved one’s loss. 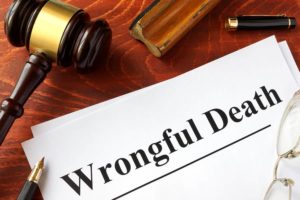 Both economic and non-economic damages can be recovered through the filing of a wrongful death claim. Some of those damages include:

California wrongful death claims must be made within two years of the decedent’s death.

What are the Common Causes of a Wrongful Death?

A wrongful death can occur in nearly any situation or location where there is the potential for negligent behavior on the part of another person. However, there are some common causes of wrongful death, including:

In Wrongful Death Cases, There May Be More Than One Liable Party

Wrongful death claims are complex, and best pursued with the experience and guidance of an attorney. One of the complexities involved in these types of claims is the reality that there may be multiple parties who are liable for the accident. Some examples of this include:

One of the many services that your wrongful death attorney can provide is help in determining all of the liable parties, as well as all of the insurance policies that could be accessed in order to obtain the amount of damages that can be recovered by the victim’s family.

Wrongful Death in the News

According to a report from Courthouse News Service, a Riverside County Sheriff’s Department Sergeant testified in late October 2018 that he had no choice but to shoot and kill an 18-year-old young man after responding to a 911 call seeking suicide intervention support. The shooting occurred in 2016, when the young man’s mother sought help, fearing that her son was suicidal following a breakup and may be looking to commit “suicide by cop.”

It is now the source of a wrongful death claim made by the young man’s family. The sergeant testified that he didn’t call for backup when he responded to the call, because he was trained to stop any immediate threat first. The sergeant and his partner encountered the deceased in the garage of the home, where the young man had a knife and reportedly lunged at the officers. The sergeant stated that he made the choice to shoot and kill the young man, rather than allow him to kill his partner.

As reported by KCBX FM, the U.S. Department of Justice is conducting an investigation into the mental and medical care of inmates at the San Luis Obispo County Jail. The announcement of the investigation came just two days after a wrongful death claim was filed against the jail by the wife of an inmate who died while incarcerated in 2017. According to the lawyer representing the inmate’s wife, the man died 21 days after his arrest due to a pulmonary embolism from a blood clot that began in his leg. The inmate was not allowed to move around much while in jail, the lawyer stated, and was neglected the entire time he was there. The San Luis Obispo County Jail has the sixth highest death rate of all jails in California over the past five years, the report noted, with 12 deaths during that time.

In October 2018, the California Public Utilities Commission fined the Bay Area Rapid Transit (BART) a record $1.3 million for a 2013 accident that killed two workers. According to a report from Curbed, the 2013 accident killed the workers as they worked on the tracks in Walnut Creek. BART previously settled a wrongful death claim with one of the workers’ families for $300,000 in 2016. CPUC found that the transit company violated multiple safety rules including cell phone use by the trainer while performing a routine maintenance run in which the train struck the employees while in automatic mode under computer controls. The trainee who was manning the train had seen the men working on the track and had attempted to put on the brakes and sound the horn, but accidentally pushed the wrong button, the report noted.

According to the Associated Press, in October 2018, a jury in the Los Angeles County Superior Court awarded $6.3 million to the family of a man who was struck and killed by a vendor vehicle at the Whittier Uptown Association Farmers Market. The report stated that the association’s insurance company—State Farm—had initially refused to pay the claim in the death of the 74-year-old victim. The family’s attorney stated that the award would send a message to Farmers Markets around the country that they are responsible for upholding safety protocols. The vehicle in question in the April 2016 accident was driving in reverse at approximately 5 miles per hour when it hit the victim, causing him to land on his head and suffer serious injuries that ultimately resulted in his death.

The vendor representatives admitted that their own negligence caused the accident, but the attorneys for State Farm said that only the driver should be found liable for the accident. The claimant argued that the association was 100 percent responsible for the accident because, according to its own rules, vehicles were supposed to be kept out of the market after it was open for business.

The San Gabriel Valley Tribune reported in October 2018, that the family of a West Covina man who was found dead in a vehicle in August has filed a wrongful death claim against the operator of the home where the man—who was autistic and had an intellectual disability—lived. According to the lawsuit, the driver of the vehicle dropped off two of its three passengers before going to his own West Covina home. The decedent was still inside the vehicle and temperatures inside of it reached more than 100 degrees. The report noted that the victim had the intellectual ability of a two- or three-year-old child, and that he would not get out of a vehicle unless someone told him to. The suit seeks to recover damages including funeral expenses, attorney’s fees, loss of financial support, and loss of love and companionship.

Aitken * Aitken * Cohn is proud of its successful record with wrongful death claims, and the ability of those verdicts and settlements to help the victims’ families during their time of need. A few examples of those claims include:

While it is not possible to guarantee future results based on past outcomes, our associates are nonetheless proud of the awards we’ve obtained on behalf of our clients.

While there is no amount of money that can bring back a cherished family member, a wrongful death claim can help to recover the unexpected expenses that family members face. If you have lost a loved one in Orange County due to the reckless or negligent behavior of another, the experienced wrongful death attorneys at Aitken * Aitken * Cohn may be able to help you recover damages.

We have more than 30 years of experience obtaining settlements and court awards for damages in wrongful death claims. Our personal injury lawyers in Orange County look forward to providing you with a free consultation and case review in order to explore the legal options that are available to you. Contact us at (714) 434-1424 or email us to schedule your consultation now.