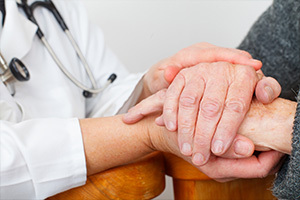 Medical malpractice feels like an unthinkable betrayal. A doctor—someone who swore an oath to “do no harm”—made a mistake that injured you. Medical malpractice can happen on the operating table, in an exam room, or even at the pharmacy when you pick up medicine your doctor never should have prescribed. Whatever the circumstances, now you face pain, stress, and expense you didn’t plan for and don’t deserve. When doctors and their staffs make harmful mistakes, it can be critical for victims to connect with a lawyer who understands the complexities of building a case for compensation from medical practices and their insurers. At Aitken* Aitken * Cohn, our Orange County medical malpractice lawyers fight for the rights of Californians injured by medical providers. If you have been injured because of a doctor’s mistake, contact us today.

At Aitken* Aitken * Cohn, we have a track record of success in recovering significant settlements and judgments for our clients in medical malpractice cases. Here are a few examples:

This is just a sample of the kinds of medical malpractice the team at Aitken* Aitken * Cohn has handled on behalf of clients and their families. We have also recovered compensation for clients who suffered significant and long-lasting hand and arm injuries as a result of the negligent injection of drugs. In addition, we have represented parents whose newborns sustained injuries caused by obstetrical negligence.

At Aitken* Aitken * Cohn, we understand money does not solve all problems for those injured by medical malpractice, and it cannot bring back a loved one who has died because of a physician’s mistake. But the funds we have been able to recover on behalf of our clients can help alleviate some of the stress and burden a medical malpractice injury can cause, and it can help ensure doctors do not make similar mistakes and harm more patients in the future.

The skilled, compassionate team at Aitken* Aitken * Cohn does our utmost to represent our clients’ best interests and achieve the best outcome possible in each unique case.

What Is Medical Malpractice?

Medical malpractice occurs when a medical provider—a doctor, physician’s assistant, nurse, surgical tech, or therapist—harms a patient by delivering negligent or deliberately harmful medical treatment. Medical malpractice does not usually include predictable complications from medical treatments, especially when medical providers have discussed those potential complications with patients and their families. Instead, medical malpractice focuses mostly on preventable accidents that adversely affect a patient’s quality of life.

Lawyers with experience in medical malpractice matters focus on several core components of proving whether a medical provider made a preventable mistake that led to harm:

The existence of a doctor-patient relationship. A patient does not need to have had a personal relationship with his doctor to have a claim for medical malpractice. Sometimes, especially in surgeries, patients never even meet some of the people who provide them with medical care. However, there does have to be a relationship in the sense of a medical provider knowingly providing care. For example, walking up to a mutual friend who happens to be a doctor at a party and asking about your back pain may not create the kind of doctor-patient relationship necessary for a medical malpractice claim.

Failure to meet the “standard of care”. Doctors and other medical providers have an obligation to provide patients with what is known as the “standard of care.” It refers to the level of medical service the patient can reasonably expect from a particular provider in a specific setting. What may be adequate care in one setting—say, in an emergency tent hospital set up after a natural disaster—may not be adequate in another setting, like a specialized surgical hospital. Furthermore, what may be adequate care from a family doctor may not be the same as what a patient can expect from a doctor who focuses on only one kind of treatment or illness. In each case, lawyers, insurance companies, and experts must determine whether the care the injured patient received met the “standard of care” for the specific situation.

The existence of an injury. It’s usually not enough for patients to demonstrate that their medical providers have made a mistake. To recover damages for medical malpractice, patients must show they suffered an injury. Injuries don’t necessarily have to be physical. The stress and trauma of the uncertainty about future health problems due to a doctor’s error can be enough to show a significant injury.

Causation. In cases of medical malpractice, it can be difficult to prove what actually caused an injury or death. If a surgeon leaves a surgical tool inside a patient following surgery or amputates the wrong limb, it’s straightforward to show how an injury occurred. On the other hand, if a patient already has a significant illness, like a bleeding disorder, and it is not obvious the doctor’s error caused injury or death, it can be more difficult to prove whether or not the doctor’s error or lack of care caused the injuries or death in question.

Who Bears The Fault For Medical Malpractice?

Most commonly, the doctor or nurse who provided negligent medical treatment is the one who is at fault for the patient’s injuries. Other doctors or nurses who were working on the patient’s case may also be held liable if they failed to notice potential problems or complications or failed to speak up at the time of the incident, resulting in improper care of a patient. Most often, it is the treating doctor who is held liable; however, nurses who have committed serious errors can also be held liable for those medical malpractice errors.

The hospital or medical facility where the medical malpractice occurred may also be directly or indirectly responsible. This is particularly true if the facility:

In some cases, defective medical devices can harm a patient. When this happens, the manufacturer of the defective equipment can be held responsible for injuries that occur as a result.

What Damages Can Victims Of Orange County Medical Malpractice Recover?

Medical expenses. Victims of medical malpractice may need emergency and long-term medical treatment, physical therapy, and medications. The cost of these services, which the patient wouldn’t have needed was it not for the malpractice, often become part of the amount awarded in a medical malpractice claim.

Pain and suffering. The pain and suffering sustained by a victim of medical malpractice can be difficult to quantify. But, there’s no doubt it’s an important part of compensating the victim, who faces physical and emotional difficulty because of a medical provider’s errors.

Lost wages or earning potential. Patients injured by medical errors may end up spending a substantial amount of time out of work or may have their earning potential permanently reduced due to disability. Compensation for these amounts is often included in medical malpractice claims.

How Do Those Responsible Try To Escape Liability?

Offering quick and lowball settlements. When it’s clear a medical provider made a mistake and has a significant liability, insurance companies may attempt to reach a quick settlement with victims and their families before they’ve had the chance to explore their legal rights. This settlement offer is routinely lower than it should be, and it usually comes with a demand that the victim/family “release” the insurer from further liability.

Working with an experienced medical malpractice lawyer is the most effective way for patients and their families to ensure they do not fall victim to these tactics.

How Much Will An Orange County Medical Malpractice Lawyer Cost Me?

Victims of medical malpractice have enough pain, difficulty, and expense to deal with without having to worry about the cost of hiring a lawyer. At Aiken * Aiken * Cohn, we offer free initial consultations to discuss whether medical malpractice victims may be entitled to compensation. If we determine that you have a case, our attorneys work on a contingent fee basis, which means, our attorneys are paid only if the lawsuit is successful or is favorably settled out of court. Contingent fees are usually calculated as a percentage of the client’s net recovery.