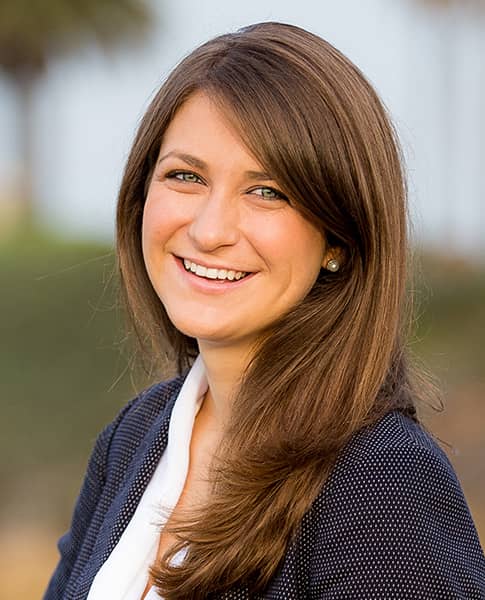 Megan G. Demshki was born and raised in Riverside, California. After graduating from Riverside Poly High School, Megan attended Chapman University where she obtained her Bachelor of Arts degrees in Political Science and Peace Studies, in addition to completing the interdisciplinary University Honors Program.

Megan received departmental honors in both Political Science and Peace Studies.  Megan served as Chapman University’s Student Body President from 2012-2013. As Chapman University Student Body President, Megan worked to strengthen United States and Russia relations as a Kremlin Fellow through the U.S.-Russia Bilateral Presidential Commission and lobbied for college student interests at the local, state and national level through groups like the National Campus Leadership Council and the Fraternity and Sorority Political Action Committee.

Upon graduation from Chapman University, Megan received the Gloria and Julian Peterson Award, awarded to one graduating senior for his or her outstanding and distinguished leadership in enriching university life. In addition to the Peterson Award, Megan received the 2012 Woman of Strength, Courage and Action Award and the 2012 Political Science Citizen-Scholar Award, given to the graduating Political Science major who most effectively combines high grade point average with civic or political engagement.

Megan went on to obtain her Juris Doctorate from Chapman University Fowler School of Law where she received CALI Excellence for the Future awards for the highest grades in the Alona Cortese Elder Law Clinic, Legal Analysis Workshop and Business Planning. Megan enjoyed helping low income seniors throughout Orange County in the Alona Cortese Elder Law Clinic. In Summer 2013, Megan began working at Aitken Aitken Cohn as the law clerk. After passing the California Bar Exam, Megan was promoted to associate at Aitken Aitken Cohn.

Megan is an active and engaged member of the Inland Empire community where she currently serves as President of the Riverside County Bar Association Barristers, President-Elect of the Consumer Attorneys of the Inland Empire and Treasurer for the Pick Group of Young Professionals, among other community and philanthropic involvement.

Megan has been involved in a number of eight and nine figure settlements, arbitrations, and verdicts in trial. In December 2018, Megan tried a medical malpractice matter alongside Partner Richard Cohn, securing a seven-figure verdict for the clients.

Recently, she obtained a six-figure verdict in a binding arbitration on behalf of a 71-year-old client who was injured when an underinsured driver made an improper turn in front of her. After over 20 years of paying premiums, the client was left fighting her own insurance company for benefits she was owed. Megan, alongside fellow associate Atticus Wegman, was able to effectively secure more than $300,000 for their client.

Megan was also involved and named in a rare and remarkable decision, in which the California Court of Appeal Fourth Appellate District, Division Three, reversed the trial court’s granting of Defendant’s summary judgment motion in the matter of Sumrall v. Modern Alloys. The defendant company argued that their employee driver was not acting within the course and scope of his employment under the “going and coming” rule. Plaintiffs argued that the company was liable under the “business errand” exception. The Court of Appeal unanimously sided with the Plaintiffs where they reasoned, “Because we can draw two reasonable inferences from these undisputed facts, we cannot affirm the trial court’s grant of summary judgment.” After returning to the trial court, Megan was involved in the dramatic $9 million settlement.