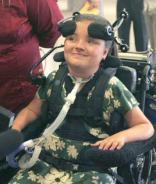 Santa Ana, CA – Leilani Gutierrez, a nine year old girl (who lent appearance and story to the campaign for the public funding of spinal cord injury research) was awarded over $54 million dollars following a trial against the United States government. The case stems from a vehicle collision that occurred on Mother’s Day, May 12, 2002, when Leilani was 4-years-old, in Costa Mesa, California, when a federal employee ran a red light and broadsided the car in which Leilani was riding. The horrific accident left Leilani a ventilator dependent quadriplegic, with no feeling from her neck down. June Gutierrez, her mother was awarded $1,040,918.00 for the physical and emotional injuries she suffered in the collision.

“Despite this 5 year ordeal, though lengthy and painful, this case shows that a citizen can stand up to the United States government and that the federal government is not immune from responsibility when it comes to the safety of its citizens,” said Wylie Aitken, a Santa Ana personal injury attorney and former State President of California’s Consumer Attorneys.

After riding a carousel at South Coast Plaza, the Gutierrez family was returning to their home in Costa Mesa, California, when the collision occurred. While proceeding through the intersection of Newport Boulevard and Wilson Street, their vehicle was broadsided by a vehicle driven by a federal employee (Department of the Army) on a business trip. The impact was so severe that the Gutierrez’s car struck a utility pole and flipped onto its side.

Following the collision Leilani required C.P.R. and mouth to mouth resuscitation and, although she was properly restrained in a child’s booster seat, the impact severely damaged Leilani’s cervical spinal cord and left her with a host of related major medical conditions. She is now confined to either her wheelchair or bed, and requires 24 hour nursing care, supplemented by the efforts of her parents and other members of her family.

“Leilani’s injuries were more devastating than you could imagine”, said Darren Aitken, co-counsel and son. “This award can ease the millions in health care costs that will be necessary over her lifetime.”

The lawsuit, a 5 year ordeal, was brought against the United States federal government, and pursuant to the legal requirements governing such lawsuits, was tried in front of a Federal District Court Judge instead of a jury.

“We want to thank the many people, such as the Costa Mesa Fire Department, Costa Mesa Police Department, medical care providers and community members that came to our aid after our lives had been devastated by the horrible accident”, said June Gutierrez, adding “We’re so happy that we will now have the funds to pursue the most advanced medical treatments available.” Leilani and her mother June have been heavily involved in aiding research efforts to find a cure for spinal cord injuries.

Research indicates that the judgment is believed to be:

“Fortunately the Judge recognized that the millions in past medical expenses, the total loss in earnings in her lifetime and the millions necessary to provide 24 hour care for her remaining life and the permanent loss of her quality of life, support such a fair and just finding”, said Wylie Aitken.