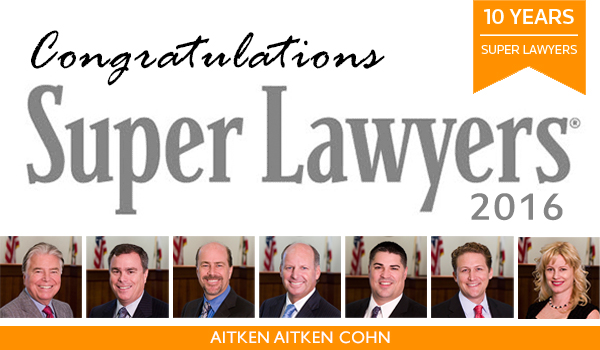 There are lawyers and then there are Super Lawyers. Every year, Super Lawyers magazine publishes its highly anticipated list of the top 5 percent of lawyers throughout the state. Once again, Aitken Aitken Cohn is proud to announce that all of our qualifying attorneys were named Super Lawyers for 2016!

Partners Wylie Aitken, Darren Aitken, Chris Aitken, and Richard Cohn have been named on the exclusive list for more than 10 years in the areas of Plaintiff Personal Injury, Business Litigation, and Medical Malpractice. This is Ashleigh Aitken’s fourth year on the list and the third year for partners Michael Penn and Casey Johnson.

This is also the first year partners Casey Johnson and Michael Penn join Wylie Aitken and Darren Aitken in receiving the honor of being listed in the Top 50 Attorneys in Orange County. Furthermore, Wylie Aitken was again recognized as one of the Top 100 Attorneys in all of Southern California.

The whole team at Aitken Aitken Cohn looks forward to many more years serving the community.

Check out the full publication here.