SANTA ANA – Three men were injured after a driver ran a red light at a Santa Ana intersection causing one vehicle to broadside the other, authorities said. The collision occurred at McFadden Avenue and Flower Street shortly before 11:30 p.m. Sunday and involved a black 2010 Toyota Corolla and a gray 1995 Mercury Cougar, police said.

The driver of the Corolla was traveling east on McFadden when he collided with a Cougar that was headed north on Flower, said Santa Ana police Cmdr. Tammy Franks. “One of the drivers ran a red light,” Franks said, adding that it was unclear who was at fault because there were no witnesses.

If you or a loved one has been involved in a vehicular accident, we welcome the privilege of consulting with you about your car/truck crash claim.  We accept cases on a contingency basis. We will advance all costs necessary to successfully prosecute your case. We are only paid for our services if we get results for you.Contact Us for a Free Consultation. 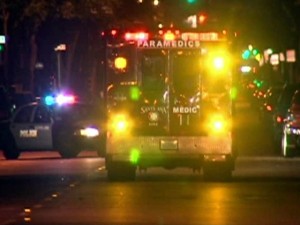