T-Minus One Week: Tee Off to End Domestic Violence 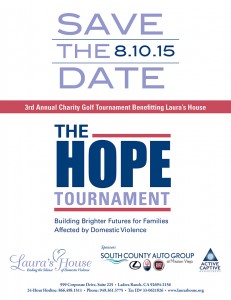 Approximately 1.3 million women and 835,000 men are physically assaulted by an intimate partner every year in the United States. Recognizing the lack of services available to victims in the Orange County area, Laura’s House was formed in 1994 with the dream of building a safe shelter. Twenty-one years later, Laura’s House continues to be the only state-approved domestic violence agency in South Orange County and has provided shelter to more than 4,000 abused women and children, and counseling, education, and legal assistance to over 50,000 persons.

As longtime supporters of Laura’s House and its mission of ending domestic violence in the home, Aitken Aitken Cohn invites you to attend its third annual HOPE Tournament: Building Brighter Futures for Families Affected by Domestic Violence. The charity golf tournament takes place on August 10, at the beautiful Marbella Country Club in San Juan Capistrano. All funds raised will go towards helping survivors of domestic abuse. Not a golfer? Not a problem! Purchase tickets to attend their dinner immediately following the tournament which will include music, wine, buffet, and a silent auction.

Purchase your tickets here and we hope to see you there!