The Orange County injury attorneys at Aitken Aitken Cohn are closely monitoring claims connected to the Coastal Fire that started May 11, 2022, in a brush near Aliso Woods Canyon, which then spread to the gated community in Laguna Niguel. The Orange County Register reported the fire prompted the evacuation of some nearby homes and a luxury resort and golf course. Recent reports estimate that the fire destroyed more than 20 homes and damaged eleven other properties.

Unlike previous fires typically driven by the Santa Ana winds, the Coastal Fire was driven by the state’s prolonged drought, which continues to worry fire officials. According to Drought.gov, drought conditions contribute to wildfires, as dry, hot, and windy weather combined with dried-out vegetation can increase the probability of large-scale wildfires. 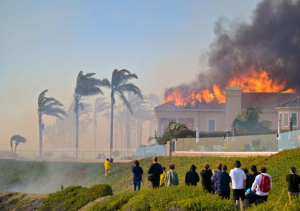 While the investigation of the Coastal Fire is currently underway, Southern California Edison (SCE) issued a brief incident report “out of an abundance of caution,” saying, “Our information reflects circuit activity occurring close in time to the reported time of the fire. Our investigation is ongoing.” SCE’s electrical equipment has previously been blamed for igniting some of the state’s most destructive wildfires.

In December 2021, SoCal Edison was fined more than $550 million for their role in sparking the Thomas, Woolsey, Rye, Meyers, and Liberty fires. The Thomas fire erupted in December 2017, burning nearly 282,000 acres and destroying more than 1,000 structures across Ventura and Santa Barbara counties. It was previously considered the state’s largest wildfire in history.

The Woolsey Fire was a destructive wildfire that first ignited in November 2018 and spread throughout Los Angeles and Ventura County. According to Cal Fire, nearly 97,000 acres were burned by the Woolsey fire, damaging more than 1,500 structures. In December 2018, 170 homeowners and businesses whose properties were damaged or destroyed by the fire filed mass tort lawsuits against SCE over their part in starting the fire. In October 2019, Southern California Edison admitted that its equipment was responsible for igniting the wildfire and issued a settlement for agencies affected.

What Homeowners Should Know

The California Department of Insurance offers some tips to homeowners who have suffered fire damage and are looking to file a claim:

Aitken Aitken Cohn has an extensive background handling major cases involving Southern California Edison. The Aitken trial team has previously secured a confidential settlement against the utility company in a wrongful death case involving the electrocution deaths of three family members caused by down SCE power lines. In the settlement, SCE admitted to violating the Public Utilities Code and claimed their electrical poles and power lines in and around the area had been poorly constructed and inadequately maintained per their standards. Our firm also represented the family of a man who was electrocuted in Cabazon after approaching a vehicle that had crashed into an SCE utility pole.

Our firm also has a longstanding background in handling Insurance Bad Faith cases. Insurance bad faith, also known as “insurance fraud,” is used to describe the mistreatment of consumers and businesses by insurance carriers. Unfortunately, it is a common occurrence in Orange County. Wylie Aitken previously secured a $17 million verdict on behalf of two homeowners who claimed their insurance company failed to properly investigate the loss after filing a claim following a house fire that damaged 80% of their home and personal property.

If you or anyone you know was affected by the Coastal Fire, fill out the form below or call one of our Orange County personal injury attorneys at (866) 434-1424 today.