Chapman University was the hub of excitement this past week where several well-known musical alum performed at the festive groundbreaking for the new Chapman University Performing Arts Center scheduled to open in 2015. World-famous tenor Placido Domingo was among the attendees as the featured speaker. University President, Jim Doti, announced that the upcoming center front plaza would proudly be named the Bette and Wylie Aitken Plaza, complete with Bette’s Bistro, where performance attendees will be able to enjoy hors d’oeuvres and a cocktail prior to performances and functions. 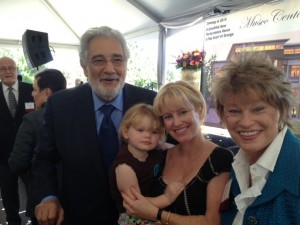