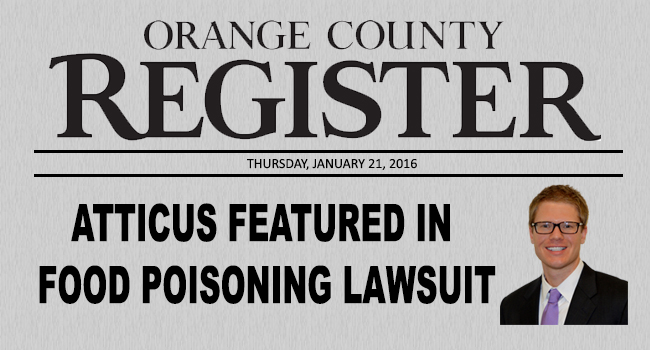 The OC Register recently published an article regarding lawsuits filed against a local and national restaurant food chain True Food Kitchen after Orange County residents became violently ill. Representing two of these victims, Aitken Aitken Cohn’s Atticus Wegman was highlighted by the OC Register as one of the attorneys working to prosecute these claims.

In August of 2014, eight people reportedly became violently ill after dining at True Food Kitchen. Natasha Minasian and Dr. Lisa Karamardian were two of these victims that required hospitalization after experiencing severe abdominal pain, vomiting, diarrhea, fever, and dehydration. Both tested positive for Shigellosis, a dangerous bacterial infection that is transmitted when people ingest items that made contact with the stool of an infected person.

The article explains that information was discovered revealing that the Newport Beach True Food Kitchen location had a history of improper food handling.  The Orange County Environmental Health Department found a litany of major and minor food safety violations dating back to the opening of the restaurant in 2010.

Check out the full article here.

In 2007, Aitken Aitken Cohn handled another food poisoning lawsuit against a Souplantation in Lake Forest where 15 consumers became violently ill. Partner Chris Aitken was able to secure a confidential settlement on behalf of his client.

Aitken Aitken Cohn does not tolerate any form of hazardous food handling practices by any restaurant and reprimands the poor practices that True Foods Kitchen has chosen to ignore. If you or anyone you know has suffered significant injuries as a result of violent food poisoning, contact us here or call 866-434-1424 for a free case evaluation.