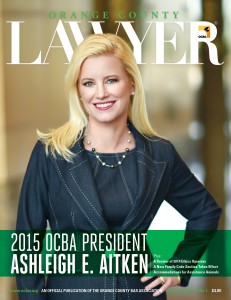 On January 15, 2015, Ashleigh E. Aitken was sworn in as President of the Orange County Bar Association (OCBA) and featured on the cover of Orange County Lawyer.  The OCBA provides a wide variety of programs, services and opportunities for its attorney members, the judiciary and the community. The OCBA is one of the largest voluntary bar associations in California, with over 9,000 members.  The reception dinner hosted over 775 people during which Aitken announced her President’s platform—a pilot task force to assist Orange County veterans with a variety of pro bono legal needs. “About 1/3 of the homeless have served in the Armed Forces, and Orange County has over 3,500 homeless vets within its borders.  This program is designed to assist veterans and military families with the legal services they richly deserve, but often do not have access to.” 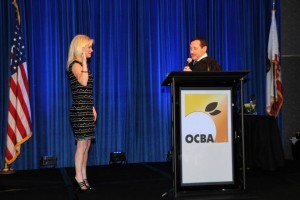 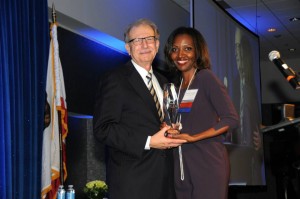