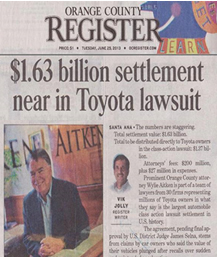 As National liaison counsel and co-counsel for suit on behalf of secondary auto dealers, Wylie Aitken, founding partner of Aitken* Aitken* Cohn, and the firm are part of a team of 30 law firms and 80 plus lawyers that represented millions of Toyota vehicle owners in the largest automobile class action lawsuit settlement in U.S. history. The total value of the settlement, which includes $1.37 billion to be distributed to Toyota owners, $200 million in attorney fees and $27 million in expenses is $1.63 billion.

The claims against the automaker have been consolidated in a Santa Ana courtroom and are pending final approval by U.S. District Judge James Selna. Aitken says he expects the deal to be finalized at the next hearing, which is scheduled for July 19. For more information, click here to read an article by the Orange County Register.

Aitken* Aitken* Cohn is proud of the efforts made by its attorneys and the entire team in protecting consumers’ interests and contributing to auto safety. Aitken said he is proud of the agreement they were able to reach on behalf of millions of Toyota, Lexus and Scion owners.

“We certainly feel vindicated for the effort and time involved for all the teamwork to produce this kind of result,” Aitken said. “We all feel very good about the impact we had on consumers. This will equate to good cars and careful practices on the part of Toyota and other carmakers. There will be an overall public benefit.”