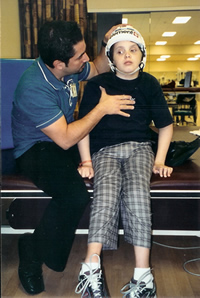 significant brain injuries by a jury in Orange County, California. The defendants in this matter were an out of state corporation, E.A. Pedersen Company doing business as Pedersen Power Products and their Western Regional Sales Manager, Peter I. As Peter I. had at trial acknowledged he had run a red light, the jury was asked to determine whether Peter I. was in the “course and scope of his employment” with Pedersen Power Products, a company based in Omaha Nebraska, at the time of the incident. The jury was also asked to determine the appropriate damage award to the F. family. The tragic automobile collision occurred at approximately 3:00 P.M. on February 7, 2005, at the intersection of Newport Boulevard and Industrial Way, as Peter I. was on his way to his doctor’s office in Newport Beach, California. The accident took place just one day following Cade F.’s 13th birthday.

Cade F., through his attorneys Wylie Aitken and Christopher Aitken of Santa Ana, California, claimed that Peter I. was in the course and scope of his employment when the incident occurred for Pedersen Power Products. Aitken argued that the appointment that Peter was traveling to on the date of the incident, while it certainly had a personal purpose as well, was part of the “return to work” program set up by his employer, Pedersen Power Products. Aitken further argued that, depending on the results of doctor visit, would certainly affect the defendant’s work related restrictions. Additionally, Aitken argued that Peter was on a company errand, to pick up a medical release letter, at the time of the incident. Finally, Aitken asserted that Peter, due to the nature of his sales position with Pedersen, was required to have a vehicle for his job and that the incident happened in the middle of his regular work day, at 3:00 P.M. 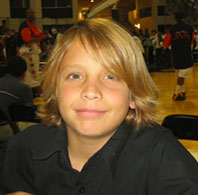 The jury was also asked to determine the reasonable and necessary damages sustained by Cade F. due to this incident. Plaintiffs counsel presented evidence that Cade F. had been subjected to nearly 40 procedures to date to combat issues surrounding a substantial traumatic brain injury. Dr. William Loudon, a top pediatric neurosurgeon in Orange County, and the treating physician for Cade F., testified that Cade could make significant recovery from his brain injury if he was provided 24 hour Licensed Vocational Nurse care.

Lisa and Joel F., the parents of Cade F., provided compelling testimony of the recent progress being made by Cade F. in his therapies. In the words of Lisa F., “the whole world is therapy” for Cade right now and explained the tremendous dedication the family has had, and continues to have, for their “exceptional” son, Cade. Joel F. explained the joy the family had of finally being able to bring Cade home from the various hospitals, and rehabilitation facilities, where Cade spent the first 15 months after the automobile incident. Lisa F. testified how her hope is fueled by a support group, “Mothers of Miracles”, that has numerous mothers, like her, that have seen more progress that their doctors could ever imagine. This sentiment was reemphasized by Cade F.’s treating physician, Dr. William Loudon. After nearly a day of deliberations, the jury found Peter I, in the course and scope of his employment with E.A. Pedersen Company at the time of the incident and awarded 23.5 Million Dollars of damages for the injuries suffered by Cade F..

Cade F. suffered a severe traumatic brain injury for which he was hospitalized for 15 months following the accident. During that time he underwent over 40 surgical procedures to combat numerous medical issues and complications. He has returned home and is currently receiving physical therapy, speech therapy and occupational therapy.

The Orange County Superior Court jury reached a verdict after over a day of deliberations against E.A. Pedersen Company, Peter I., in the amount of 23.5 Million Dollars; set forth as follows: