On May 6 and May 7, 2013, Aitken * Aitken * Cohn attorneys Casey R. Johnson and Michael A. Penn traveled to Sacramento, California to participate in CAOC’s Justice Day. The events on May 6, 2013, included receptions with legislators and other prominent elected officials, including CAOC’s Women’s Caucus Mixer, attended by California Attorney General Kamala Harris. The Orange County Trial Lawyers Association also hosted its annual reception at Vallejos, which was well attended by elected officials and attorneys from across the state.

During the trip Casey and Michael met with several legislators to discuss the importance of full funding of the courts, a third and equal branch of government. In addition to meeting with local legislators, including Assemblyman Tom Daly and Assemblywoman Sharon Quirk Silva, the entire group of over 200 attorneys were addressed by California State Senator Ricardo Lara during lunchtime remarks on May 7, 2013. 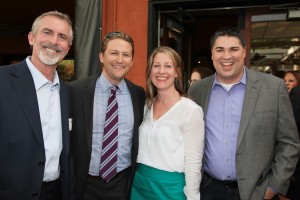