Adventures with the Aitken Family 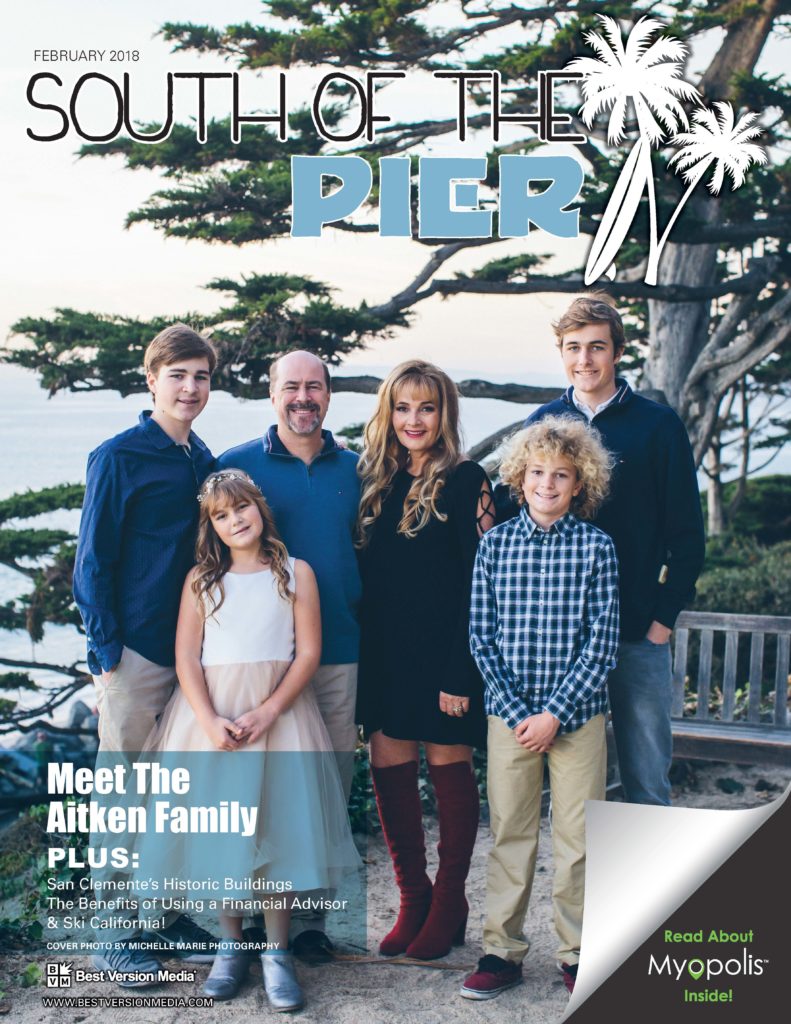 As published on South of the Pier Magazine, February 2018

For a family that loves to travel, it’s fitting that Christopher and Maureen Aitken met while abroad. The couple, both attorneys, met while at a legal seminar in Puerto Vallarta in 1997 and married two years later. The family now includes four children: Tyler (18), Jack (15), Shane (12) and Annalise (10).

An active family, all the children either play sports or participate in theater and the arts. Tyler and Shane play club volleyball, and the whole family enjoys playing, especially at the beach. Tyler also plays volleyball for St. Margaret’s and is busy applying to college. Jack enjoys basketball, as well as singing and musicals. In fact, he was Mufasa in the school’s production of The Lion King. Shane loves to play all sports while Annalise loves horseback riding as well as exploring her artistic side.

The family also enjoys going on adventures together. “We love to travel and have taken many trips together over the years,” says Maureen. “We love Turks and Caicos and Europe. Last year we traveled to Italy, Switzerland and Austria. This year we are going to the Canadian Rockies for an action-packed adventure.” While the family loves the excitement of travel and adventure, they’ve had to face personal challenges here at home. “In 2014, Jack broke both arms and his femur in a ski accident. It was difficult for him. He had both arms in a cast and he couldn’t do anything by himself,” remembers Maureen. “Six weeks later, I was diagnosed with breast cancer and underwent chemo, radiation and had an operation.” Helping each other through difficult times has helped in many ways. “We really pulled together as a family,” Maureen says. “Jack used that as a pivotal moment in his life. It gave him perspective. He doesn’t let things bother him as much anymore.”

Perspective is something Maureen learned early in life as well. “I’ve always been super hands-on with the kids. Family time is so important. We always travel with our kids and have taken some amazing trips. I don’t look back and wish I did this or did that because we have spent so much time with the kids,” explains Maureen. “I think that has a lot to do with losing my mom [to ovarian cancer] when I was younger.”

“One of my favorite trips was last year,” Maureen continues. “We went to Europe and were in a different country every three days. We had that trip planned but then I got sick and we had to cancel. As soon as I got better, Chris rescheduled it.” Little did Maureen know, her husband had planned a romantic surprise. While in Tuscany, they were staying at a beautiful house and Chris arranged for a photographer to come take family photos. Unbeknownst to Maureen, when the “photographer” arrived, it wasn’t to take photos, but instead was a minister there to renew their marriage vows. But in many ways, it’s true for the Aitkens that there is no place like home. Maureen grew up in the Cyprus Shores neighborhood. Chris grew up in Placentia but spent time in his family’s vacation home, located near Casa Romantica. Now, they’re raising their family here as well, and even live on the same street of Maureen’s childhood home. “We live in Cotton’s Point, which was inside of the Western White House’s gate when I was growing up,” recalls Maureen. “I remember when I was little, we’d put our feet over the gate and then hide and watch as secret service would come out to look. We’d watch the black limousines come and go with President Nixon.” 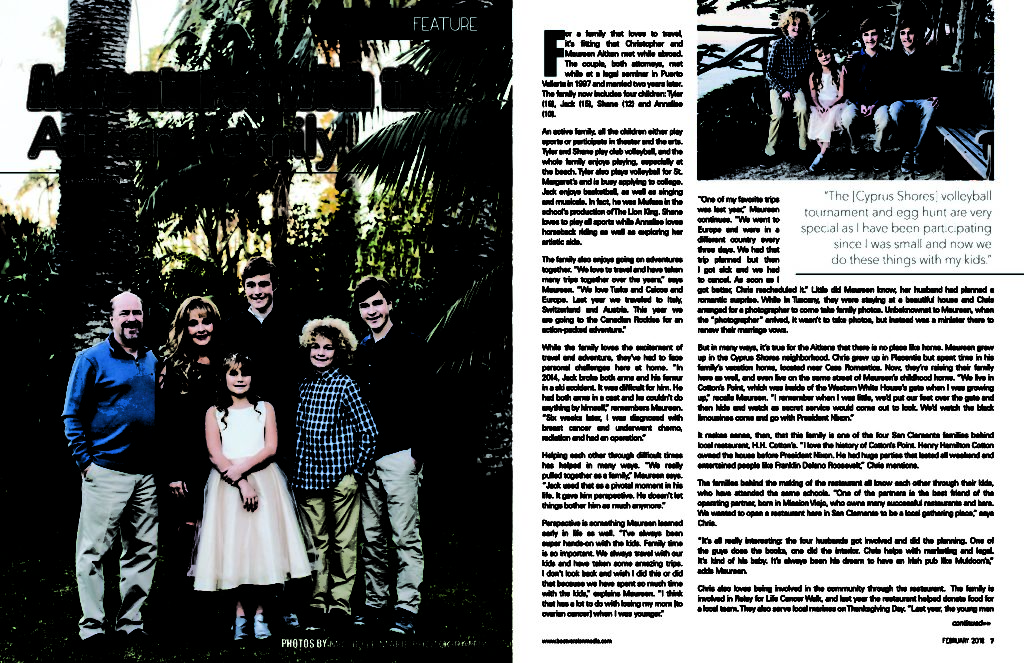 It makes sense, then, that this family is one of the four San Clemente families behind local restaurant, H.H. Cotton’s. “I love the history of Cotton’s Point. Henry Hamilton Cotton owned the house before President Nixon. He had huge parties that lasted all weekend and entertained people like Franklin Delano Roosevelt,” Chris mentions. The families behind the making of the restaurant all know each other through their kids, who have attended the same schools. “One of the partners is the best friend of the operating partner, born in Mission Viejo, who owns many successful restaurants and bars. We wanted to open a restaurant here in San Clemente to be a local gathering place,” says Chris.

“It’s all really interesting: the four husbands got involved and did the planning. One of the guys does the books, one did the interior. Chris helps with marketing and legal. It’s kind of his baby. It’s always been his dream to have an Irish pub like Muldoon’s,” adds Maureen. Chris also loves being involved in the community through the restaurant. The family is involved in Relay for Life Cancer Walk, and last year the restaurant helped donate food for a local team. They also serve local marines on Thanksgiving Day. “Last year, the young men were leaving for Afghanistan a few days after the dinner. They’re barely 19 years old and some have never been outside of their hometowns in the Midwest until now.”

The family gives back to the community in other ways as well. As a breast cancer survivor, Maureen participates (placing second in the survivor’s division in 2016) in the Susan G. Komen Race for the Cure, while Chris’s office, Aitken, Aitken and Cohn, sponsors the team. “Evelyn Lee, from Chris’s office, runs the team and sets up the booth,” explains Maureen. “She’s done it every year since I was sick.”

Besides charities, the family participates in activities in their local neighborhood. “I love the sense of community where we live,” says Maureen. “We participate as a family in Cyprus Shore’s annual volleyball tournament. The man that runs the tournament, Joe Ponder, grew up in Cyprus Shores as well. I love living where there are people that I have known since I was a small child.”

“We also have an annual neighborhood Halloween party and there is an annual Easter egg hunt in the Cyprus Shores Park,” continues Maureen. “The volleyball tournament and egg hunt are very special as I have been participating since I was small and now we do these things with my kids.”

“It’s so great to live here with all the support. All our neighbors got together and brought us meals when I was sick. There’s just a strong sense of community here,” says Maureen. That sense of community, as well as the history that comes with living in Southwest San Clemente, is important part to the Aitken family. “A lot of people don’t know the history of Cotton’s Point.

In the restaurant, we have lots of pictures and things that explain the history of the area and Cotton’s involvement here. That’s why we named the restaurant H.H. Cotton’s. It’s really fascinating to think that the property we’re standing on has so much history.”