Congratulations to Wylie Aitken for being featured on the cover of the 2014 edition of SuperLawyers Magazine, and once again making the Top 100 Lawyers in Southern California. This exclusive list consists of the top five percent of lawyers who have bot 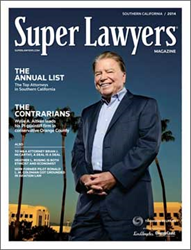 h been nominated by peers and validated by third party research across twelve categories. This has been the tenth year in a row that Wylie has received this honor. This year, the magazine features Wylie on the cover and includes a four page article titled “The Contrarians,” which describes the history and role of the Aitken firm in the community. The article details some of the landmark cases and the firm’s team approach to successfully litigating them. Wylie and whole team at AA&C are proud to be recipients of such a prestigious award and look forward to many more years serving the community.

To see the magazine and read the full article (page 24,) click the link below!