FEATURED ON THE TODAY SHOW: Aitken * Aitken * Cohn’s ‘miracle’ clients and their rescuers

Aitken * Aitken * Cohn attorneys Michael Penn and Ashleigh Aitken were in New York City, coordinating at NBC’s request, a television press interview with client Kelli Groves and her two daughters. NBC’s Today Show aired the heroic rescue on May 8th at 7:30 a.m. Today Show host, Matt Lauer, interviewed Kelli about the dramatic rescue of her and her 2 daughters due to a “miracle” incident which occurred earlier this year and received international news attention. The three were trapped for several hours in their crushed vehicle dangling from over 100 feet above a highway overpass after being struck by an 18-wheel semi tractor-trailer. Their story is one of unimaginable courage during the incredible ordeal and tremendous gratitude for the heroism of their rescuers. 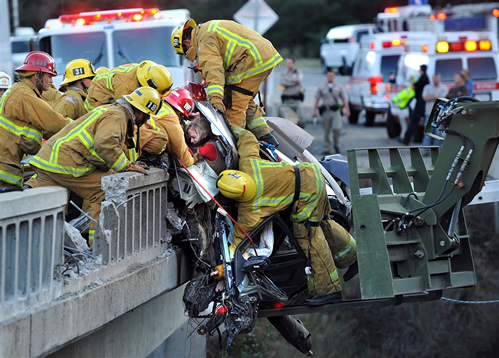 On January 12, 2012, while traveling northbound on US 101 near Three Bridges outside Buellton, California, San Clemente school teacher Kelli Groves, along with her two daughters Sage (10-years-old) and Mylo (10-months-old) were driven into a bridge railing by the tractor-trailer which then careened over the bridge’s ledge leaving her and her children teetering precariously over a 100-foot drop above Nojoqui Creek canyon. After plowing through the guardrail into the canyon below, the 18-wheeler burst into flames upon impact. The BMW Kelli was driving was turned into a mass of tangled steel entwined in the concrete girders on the outer side of the bridge’s ledge.

Shortly after the fiery crash, in what many are referring to as “divine intervention,” Navy Seabees, transporting a crane back to their base, stopped and utilized the crane to prevent the car from plummeting into the canyon below. Emergency crews extricated Kelli and her daughters from the mangled vehicle which had been secured with a cable by a quick-thinking tow truck driver who was assisted by the emergency responders, including the fire department personnel and CHP officers.

Kelli stated, “[The rescuers] risked their own lives to save my family. They kept fighting for us and showed unbelievable dedication and strength. They gave us our family and saved our family’s future.”

To hear first-hand the heartfelt story of this horrific crash as told by the mother, view the dramatic footage of the amazing rescue efforts, and watch Kelli’s surprise reunion with her rescuers, visit our website at aitkenlaw.com.