State Independent Living Council Speaks Out on the Need for Increased Awareness of the Impact of Living with Brain Injuries.

SACRAMENTO, Calif. – March 5, 2012 – A brain injury can happen to anyone, anytime, anywhere in the world. According to the Brain Injury Association of California, approximately 1.7 million Americans sustain a traumatic brain injury each year, and a brain injury occurs somewhere in the U.S. every 21 seconds. “Brain injuries are permanent and create devastating and life-altering conditions for those affected for the rest of their lives,” states Elsa Quezada, Chair of the State Independent Living Council (SILC) and Executive Director of the Central Coast Center for Independent Living. “Considering the impact and cost of these types of injuries and that California has only seven traumatic brain injury centers, the role of independent living centers throughout the state is even more critical.

“Brain injuries result from various causes, including motor vehicle accidents, sports-related head injuries, strokes, aneurysms and the primary injury among seniors, slipping and falling. The cost to treat such injuries is confounding. According to the Centers for Disease Control and Prevention’s (CDC) 2010 presentation, the “public health burden of traumatic brain injuries in the United States annually represents 52,000 deaths, 275,000 hospitalizations and 1,365,000 emergency room visits.” 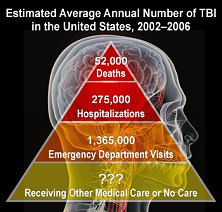 “And the numbers are increasing with an estimated 20 percent of U.S. soldiers coming back from overseas who are affected by brain injuries,” stresses Quezada.

The CDC estimated the economic costs in 2010 for brain injuries, including direct medical and indirect costs, totaled $76.3 billion. As reported by the Brain Injury Association of America (BIAA), the average cost of “hospital-based acute rehabilitation is approximately $8,000 per day, while the range of post-acute residential care is $850 to $2,500 per day, and day treatment programs, excluding room and board, range from $600 to $1,000 for four hours of therapy.”

“The cost for institutional-based health care services is extraordinarily expensive, but more importantly, people with brain injuries want and have the right to live independently in their communities,” states Cherie Phoenix, SILC Council Member and Executive Director of Life After Brain Injury in Ventura County, California. “Our state is struggling economically, and with cuts being made to Medi-Cal, there will be increased reliance on community-based services.”

In a BIAA report titled, Conceptualizing Brain Injury as a Chronic Disease, post-acute levels of treatment, or non-hospital-based treatment, are “being provided by non-professionals under the direction of a team of professional consultants such as doctors, nurses, physical therapists, occupational therapists, speech language pathologist and neuropsychologists.” Individuals surviving brain injuries rely heavily on their family as members of the support team.

Both Quezada and Phoenix believe there is a lack of awareness on what it takes for individuals to live with a brain injury. “We are dedicating a segment of the SILC Board meeting on March 20-21 in Sacramento to brain injury awareness. We will open a portion of the meeting up to the public and will encourage individuals to share their experiences of living with this undiscriminating disability,” states Quezada.”

We want to emphasize that providing support for an individual living with a brain injury is not just a family issue, it’s a community issue,” says Phoenix. “Support needs to come from all sides, including policymakers, medical providers, service providers and the general public. We must recognize the need to provide services to individuals living with brain injuries and the fact that most brain injury survivors will require ongoing, lifelong access to these services.”

The California State Independent Living Council is an independent state agency which, in cooperation with the California State Department of Rehabilitation, prepares and monitors the State Plan for Independent Living. SILC solicits continual public feedback on the effectiveness of independent living services and coordinates with similar agencies and councils at the state and federal levels to increase communication and help assure that services to people with disabilities are delivered effectively.

Aitken * Aitken * Cohn has successfully represented numerous victims of traumatic brain injuries in Orange County, California and Nationwide. The law firm has the compassion, resources and experience to consult the unfortunate victims of brain injury.  We deliver the results that you and your family deserve.

We invite you to visit our website at: www.aitkenlaw.com. For a free consultation from a nationally recognized brain injury lawyer.