Chosen for his incredible achievements as a trial lawyer as well as his impact on creating a safer society, Wylie credited his education at Marquette University for laying the foundation of his successful career. He graduated from Marquette University School of Law in 1965 and returned to California where he passed the bar and founded the Law Offices of Wylie Aitken in 1970 and is now Aitken Aitken Cohn. He explained that helping people who suffer sudden and tragic reversals in their lives is his great privilege.

In addition to his work on high-profile cases and landmark decisions, Wylie was also chosen for he and his wife Bette’s generosity in supporting higher education which has included significant contributions and service to Chapman University, CSU Fullerton, Santa Ana Community College, and establishing the Wylie and Bette Aitken Law School Scholarship fund at Marquette University.

During his acceptance speech, Wylie thanked his law school professors and Marquette friends, and gave a special shout out to Law Professor Robert O’Connell and the late Dean Howard Eisenberg. He concluded his speech acknowledging “a hero in the room”, wife Bette Aitken, who has supported him through law school and all the years he’s lived out his dreams. 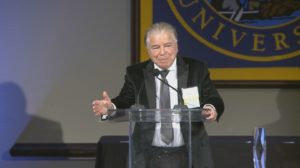