Michael Penn Named One of the “Five Associates to Watch” 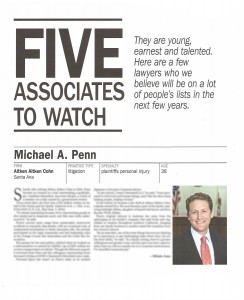 Congratulations to Michael Penn who was named to the “Top Five Associates to Watch” list! He was considered alongside over 400 attorneys throughout California and was selected a part of the top five whose dedication and excellence in the legal field have set them apart.

Now in his eleventh year at Aitken Aitken Cohn, Penn has handled a variety of high-profile cases including one in which he was co-counsel in a trial representing a quadriplegic, ventilator-dependent, four-year-old girl. She was the victim of a massive car crash caused by a government worker. After three years of hard work and dedication, the firm won a $55 million verdict on behalf of the little girl and her family.

Michael Penn specializes in handling plaintiff personal injury cases including traumatic dog attacks, catastrophic motorcycle accidents, employment termination and faulty attraction rides. He attributes his success to Aitken Aitken Cohn providing him with the opportunities that allow him to handle the types of challenging opportunities “not usually seen in a corporate environment.”

Aitken Aitken Cohn is proud to have such a distinguished attorney on the team!