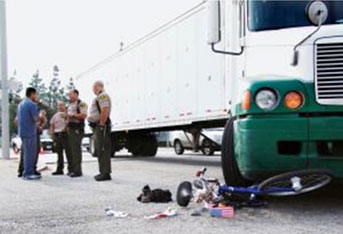 On the morning of November 25, 2008 Plaintiff Jim M. went on his daily morning bike ride from his home. On this day, like many others, Jim put on his helmet, his reflective vest, and began riding his bicycle, which was equipped with reflectors. Jim had been on his bike for about an hour and a half before he reached the intersection of Lemon Avenue and Laycross Drive. At the intersection, Jim waited patiently for a train to pass. Suddenly and without warning, Jim was struck to the ground by a tractor-trailer driven by Defendant Jose G. Defendant was making a right turn and did not see the Plaintiff. Shortly thereafter, Jim lost consciousness and was transported to a nearby hospital.

Following a brief awakening, Jim soon lost consciousness again. When Jim woke up for the second time, he found that his right leg was amputated below the knee. Jim remained in the hospital for nearly a year. Jim went from being an active, healthy 76-year-old male to a catastrophically injured patient in need of serious continuing medical care. As a result of the seriousness of the injuries Jim sustained, he requires assistance with daily activities, including: help eating, bathing and taking medications.

Plaintiffs contended that Defendant, Jose G. caused the incident by failing to yield to Jim in a roadway prior to turning. Plaintiff contended that Jose G. was found to be in violation of California Vehicle Code §22107 which states: “no person shall turn a vehicle from a direct course or move right or left upon a roadway until such movement can be made with reasonable safety and then only after the giving of an appropriate signal in the manner provided in this chapter in the event any other vehicle may be affected by the movement.” Plaintiff contended that Jose G. changed his story from the time he was interviewed by police and his deposition.

Plaintiff contended that Defendant, Jose G., was an employee not only of a trucking company but also Scully Distribution Services (“Scully”) at the time of the incident such that vicarious liability would be established. Plaintiff argued that while Jose G. signed an agreement as an independent contractor, his daily actions made him an agent of Scully at the time of the incident. Intensive discovery revealed that Jose G. basically worked exclusively for Scully, even though he was listed as an independent contractor. Plaintiff contended that Defendant’s job functions were exactly the same as individuals employed as direct Scully drivers.

Defendant, J.T. McKinney Co. Inc. owned the trailer that defendant, Jose G. was hauling with his tractor on the date of the incident.

DATE & LOCATION OF INCIDENT : The incident occurred on November 25, 2008 at approximately 11:30 a.m.at the intersection of Laycross and Lemon Avenue, City of Industry, County of Los Angeles, State of California.