A recent front page article in the 13 February 2014 issue of the OC Register warned about the dangers of cat country.  After a double sighting of mountain lions in the Whiting Ranch Park, officials have increase patrols and warnings.  Aitken Aitken Cohn is all too familiar with the dangers that mountain lions create and the risk of an encounter. In a historic 1991 case verdict, the plaintiff, Laura Small who was represented by AA&C received over $2 million dollars after being brutally attacked by a mountain lion in the Ronald W. Caspers Wilderness Park.  Laura S. and her Mother brought suit against County of Orange for failure to warn or remove danger from Public Park. Defendant disputed their liability on the basis that they did not know of the threat and are not responsible for the acts of a wild animal on unimproved public property.  Wylie Aitken was able to effectively prove that it was the responsibility of the park to warn about the dangers of mountain lions and that their failure to do so directly resulted in Laura’s injuries.  For full case details visit /mountain-lion/

California Fish and Wildlife have started investigating the sightings and are helping to monitor the park.  The parks have remained open throughout but there are warnings the mountain lions and their unpredictable behavior. Here at AA&C we ask all families to check with rangers before entering the park about current conditions and any possible dangers they may face.   We would also like to thank the rangers and the OC Register for the increase in the public awareness of the issue. Here is a picture from one of the sightings, while blurred, one can clearly see the mountain lion in the tree. 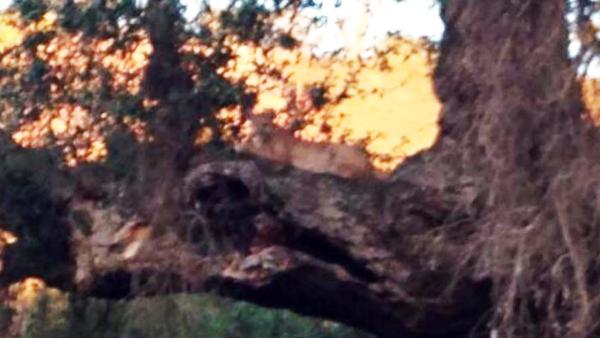