Metrolink Train Derails In Oxnard After Colliding With Truck – 28 Injured

OXNARD, CALIFORNIA (February 24, 2015) – A Metrolink commuter train struck a vehicle in Southern California this morning causing five of the train cars to derail, and three to be left on its side. Currently, there have been no fatalities but 28 people have been left with head trauma and neck and back injuries, with four in critical condition.

The scene of the accident occurred on the Ventura County Line tracks between Camarillo and Oxnard, about 70 miles northwest of Los Angeles just before 6 a.m. NBC News reported that “the conductor used the train’s emergency-braking system after noticing the truck and trailer on the tracks near 5th Street and Rice Avenue.” Unfortunately the conductor was unable to come to a complete stop in time.

The driver of the truck fled from the scene, but was detained by police a couple miles from the site of the train crash. 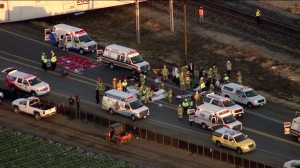 The Los Angeles Times reported that “Union Pacific was hoping to make repairs by the morning” and that The National Transportation Safety Board is aware of the incident and is “currently gathering information.”

This crash follows two major crashes involving Metrolink trains in the past 10 years. In January 2005, a truck abandoned on a rail line near Glendale caused a Metrolink train to derail and strike other trains on either side of the track, killing 11. In 2008, a freight train and Metrolink train collided head-on in Chatsworth, killing 25.

The whole team at Aitken Aitken Cohn is saddened to hear about this fatal train crash in Oxnard and extends our deepest condolences to friends and family affected by the incident. As one of California’s leading personal injury law firms, we recognize the danger of train accidents and have successfully represented these cases in the past. In 2008, Aitken Aitken Cohn was selected as Plaintiff’s Liaison Counsel in the deadly train collision in Placentia, California.

If you or anyone you know has been affected or are in a similar situation, we encourage you to contact us or give our lawyers a call at (866) 434-1424 for a free consultation.