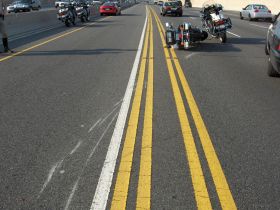 On June 26, 2006, on the southbound State Route 55 Freeway, north of the Collins Avenue overcrossing, Plaintiff, a Garden Grove Police Officer, was traveling southbound on SR 55 in the HOV lane of traffic on his motorcycle.  According to the Officer’s deposition testimony, as well as an eyewitness statement and testimony, the Garden Grove Officer was traveling between 30 and 45 miles per hour when suddenly, and without warning, the Defendant CHP Motorcycle Officer, who was traveling on his CHP-issued motorcycle, pulled directly in front of the Garden Grove Officer while traveling at approximately 10 miles per hour.  It bears noting that an independent eyewitness to the entire sequence of events definitively testified that he never saw the CHP Motorcycle Officer look over his left shoulder to check his “blind spot” before cutting off the Plaintiff.

In order to avoid colliding with the CHP Motorcycle Officer, Plaintiff immediately braked and swerved to the left.  This movement forced Plaintiff into a red Pontiac Sunbird that was in the HOV lane.   As described by both Plaintiff and an eyewitness, Plaintiff was thrown over the handlebars of his motorcycle and onto the asphalt in lanes of traffic.

Upon further reflection, the CHP issued a revised report that determined the most at-fault party to be “unknown,” based on the lack of any substantiating physical evidence or sufficient witness statements.

PLAINTIFF’S CONTENTIONS: Plaintiff contended that the Defendant CHP Officer failed to check his blind spot, crossed double yellow lines (between the HOV and number one lanes of traffic) and pulled in front of Plaintiff at a low rate of speed, cutting Plaintiff off, and forcing Plaintiff to veer into an automobile in the HOV lane.   Plaintiff contended that since the Defendant CHP Officer was operating his CHP-issued motorcycle, while in the course and scope of his employment, the California Highway Patrol/State of California were vicariously liable for his negligence.

DEFENDANTS’ CONTENTIONS: Defendant contended that Plaintiff caused the accident by driving at an excessive rate of speed for the conditions (more than 10 miles per hour faster than traffic in the HOV or number one lanes of traffic) and by driving in the buffer zone between the number one and HOV lanes.

INJURIES: Left knee grade 1 open Schatzker-6 fracture (fractures of tibial plateau, patella and tibia).  The afternoon of the accident, Plaintiff underwent an open reduction and internal fixation of his left proximal tibia including the placement of screws and a plate, as well as irrigation and debridement of his left proximal tibia.  Plaintiff underwent intensive physical therapy, and was returned to work on limited duty in October, 2006, and to full duty in February, 2007.

FINAL RESULT: The entire case settled for $395,000, following a mediation with Hon. Robert Polis (ret.) of Judicate West, just before the exchange of expert designations.  The City of Garden Grove recovered 100% of its claim for reimbursement for workers’ compensation payments (including medical bills and salary replacement), a total of $85,294.90.