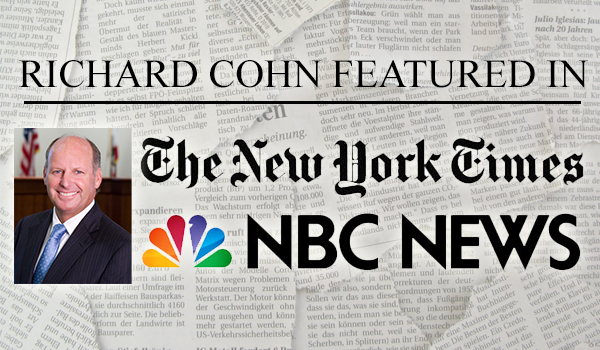 What happens when the “fun and games” turn deadly? Ten years ago, AAC Partner Richard Cohn was secured by the family of Kenny Luong to represent them in a case of wrongful death by a fraternity hazing ritual against Lambda Phi Epsilon. Now following the announcement that prosecutors are planning to criminally charge members of Pi Delta Psi in connection with another hazing-related death of Michael Deng at Baruch College, the issue of fraternity hazing, particularly in Asian-American fraternities, have come back into the spotlight.

The New York Times and NBC News sought Richard Cohn for his expert insight and opinion about the matter.

In the NBC News article, Cohn explains that when it came to the death of Kenny Luong, he believes the legal consequences should have been more severe. Luong died after he participated in a tackle football game where fraternity brothers outnumbered the pledges and subjected them repeatedly to late hits and double-teaming. The fraternity intentionally disguised the hazing ritual as a football game to knowingly skirt the university’s anti hazing rules. By the time Luong reached the hospital after he was tackled and did not get back up, his brain had swelled so much that doctors drilled holes in his skull to try to relieve the pressure, but he never recovered. Although Cohn was able to successfully secure $1.7 million on behalf of Luong’s family, he called the decision by the Orange County District Attorney’s office not to prosecute the Lambdas “a missed opportunity.”

In the New York Times article, Richard is quoted explaining that hazing continues even when students are told they do not have to take part because they fear they will be rejected by the fraternity if they do not participate in the rites. “In practice, what is really happening is flat-out hazing despite the fact that they put together all kinds of legal documents that set forth rules against hazing and all the members are supposed to sign off on it.”

Check out the full articles here and here.

Aitken Aitken Cohn condemns the act of fraternity hazing and is committed to playing a continuous role in fighting against those that perpetrate harmful acts of bullying. If you or anyone you know has suffered significant injuries as a result of fraternity hazing, contact us here or call 866-434-1424 for a free case evaluation.