At least 10 people were killed and nearly 200 injured on Wednesday when two Los Angeles commuter trains collided after one struck an automobile left on the tracks in what authorities called an aborted suicide attempt by a “deranged” man.

Police and fire officials said the man slashed his wrists and stabbed himself in the chest shortly before parking his Jeep Cherokee on the tracks. But he jumped clear at the last moment and watched as the two high-speed trains smashed together and derailed in a fiery wreck.<

The man was identified by police as Juan Manuel Alvarez, 25. He was found wandering the scene after the predawn accident, muttering: “I”m sorry, I”m sorry,” according to a local television report. Police said the man, who was uninjured in the crash, was arrested and would be charged with at least 10 counts of murder.

Los Angeles County District Attorney Steve Cooley said decisions about charging the suspect would be made by Friday.

Glendale Police Chief Randy Adams said Alvarez admitted parking on the tracks with the intention of killing himself, but apparently changed his mind and fled as one of the commuter trains bore down on his Jeep.

“He was very distraught and upset and realized that he caused a major disaster,” Adams told a news conference.

The commuter trains also struck a parked freight train, sparking a brief fire. The collision occurred just after 6 a.m., near a shopping strip at the edge of an industrial area near Glendale, north of downtown Los Angeles.

About 125 people hurt in the train wreck were hospitalized, and 60 others were treated for minor injuries and released, fire officials said. At least 10 people died, including a sheriff”s deputy and a train conductor.

Metrolink, the Southern California commuter rail service that operates the train tracks, said it was the worst accident in its 13-year history.

The impact sent passengers flying through the trains and landing on top of one another. Firefighters found bleeding passengers walking dazed amid a tangle of twisted wreckage and scattered shoes, briefcases and gravel. Some survivors were pushing others in shopping carts taken from an adjacent store.

The smell of diesel spilled from one of the stricken locomotives filled the air.

Carol Smith, 50, was on her way downtown to work and had just put down her newspaper and was starting to meditate. “And all of a sudden, the train pulls the brakes and jerks and the lights went out,” Smith said. She was able to walk off unscathed, although she saw a number of severe injuries.

“I walked by a lot of people who were lying on the tracks and couldn’t move,” Smith told Reuters.

“This is the worst train accident I have ever seen,” Los Angeles Fire Department Capt. Rex Vilaubi said. 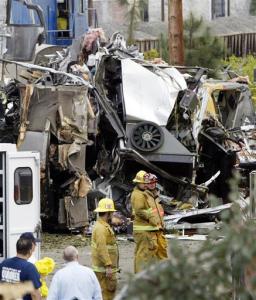 Metrolink officials said the commuter trains, each consisting of a locomotive and four double-decker passenger cars, are authorized to travel at up to 79 mph through the area. But they were probably going somewhat slower because one had just left a nearby station and one was approaching it.

Metrolink chief executive David Solow said the severity of the wreck was due to the Jeep”s having been wedged tightly into the tracks, creating an “immovable object.”

Adams described the suspect as a “deranged individual” and said he had a record of prior drug-related arrests, but police knew little else of his background. He said investigators believed him to be a transient.

The man”s self-inflicted slash and stab wounds, made with a knife soon before the train wreck, appeared to be superficial, Adams said.

Los Angeles County Sheriff Lee Baca, whose department oversees rail safety, said he was “outraged that people coming to work on a very safe train system would have to face something as tragic as this.”

“When some individual parks his vehicle on the train track knowing full well that a train is coming, this is cause for serious, serious alarm.” he said.