CASE DESCRIPTION: The defendant attempted to make a left turn across the US Highway 101 while

towing a large piece of farming equipment with a flatbed truck.  The defendant was unable to clear the road before oncoming traffic crossed their path.  The plaintiff struck the rear portion of the trailer.  The driver suffered severe mental and physical injuries.  The driver filed  suit to recover for his physical and mental injuries, while his wife sought compensation for loss of consortium. 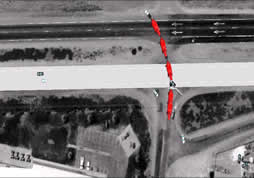 Defendant Jose L., and employee of Defendant Seed Company attempted to make a left hand turn across the northbound lanes of US Highway 101 while towing ae large piece of farming equipment with a flatbed truck.  Plaintiff Young K. was driving his personal vehicle in the number one Northbound Lane and collided with the Seed vehicle.  Mr. Young K’s wife, Tai L., was a passenger in Mr. Young K’s vehicle acts the time.

Immediately prior to the collision, Mr. Young K. was in the act of passing two vehicles traveling northbound in the number two lane traveling at approximately 75 mph.  Eac 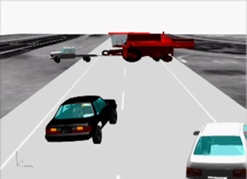 h of these vehicles were able to stop an avoided striking the Seed truck and towed equipment, but Mr. Young K. was not.  Mr. Young K. attempted to swing around the towed equipment to the right, but was unable to do so and struck the rear of the Seed vehicle at a high rate of speed.

Plaintiffs’ contentions as to liability used that the Seed Co. vehicle made an unsafe turning maneuver across plaintiffs’ right of way, thereby precipitating this collision.  In support, plaintiffs’ cited the testimony of an eyewitness who was traveling northbound and who said that she needed to make an unplanned right onto Spence Road in order to avoid hitting the Seed vehicle.

Defendant driver and Seed Co. contended that Mr. Young K. was traveling at an unsafe speed based on witness estimates that he was troubling at between 70 to 80 mph as he approached the intersection.  Both defendant Jose L. and the driver of an accompanying eyelid vehicle testified that it was safe to cross the northbound lanes when the truck began its turning maneuver, but Mr. Young K. negligently failed to appreciate the 75 foot long, 14th foot-high vehicle in front of him.  Defendants further pointed out that both vehicles traveling in the number two lane alongside Mr. Young K. were able to stop their vehicles safely.

Plaintiffs also contended that this intersection presented a dangerous condition of public property when used by the reasonable prudent driver.  Years before this incident, an engineering firm presented an engineering evaluation outlining why this intersection should be signalized.  This proposal seems to have been rejected out of hand, with no formal counter evaluation been conducted.  Despite the high risk of major injury presented by allowing cross-traffic across a busy express-way, there was no system to reduce speed as vehicles approach this intersection even though the prevailing speeds were too great to permit traffic to safely cross.  Conditions in this area had dramatically changed since this stretch of road was designed and constructed, which increasing speeds, traffic volumes and side entry usage.  The accident rate for northbound traffic was well above the averages based on the volume of traffic.  No improvements, however, were made in response to these changes.

Several solutions could have been implemented to one alleviate this threat to the motoring public. 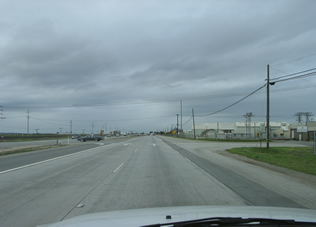 Defendant Caltrans maintains that the intersection was not dangerous.  It claimed that the accident rate was not higher than average, and that it was immune based on the “design immunity” created by Government Code section 830.6.  Caltrans brought a motion for summary judgment on the design immunity issue, which was night by the trial court.

Plaintiff Tai L. suffered lacerations to her hands and arms that required treatment at a hospital.  Ms. Tai L. also has suffered a complete loss of her husband consortium.  As a result of his head injury, Mr. Young K. lost several years of memory prior to the incident, and cannot recall his wife or the fact that he was married to her.  Therefore, Mr. Young K.and Ms. Tai L. became divorced following this incident.

DATE & LOCATION OF INCIDENT: 9/8/02 at 10:00 a.m on the Northbound US-101, in the vicinity of its intersection with Spence Road, County of Monterey California.

PLAINTIFF’S AGE: 31 years old at the time of the incident

For Defendant – State of California CalTrans