CASE DESCRIPTION:  Plaintiff was driving in the rain up Pacific Coast Highway near Laguna Beach.  Defendant was driving employers van down Pacific Coast highway, crossed the center line and collided with Plaintiff head on.  On the section of road where the accident occurred, road construction was taking place and several hundred feet of “trench plates” were in place.  Plaintiff brought suit against, the driver, his employer, the trench plate manufacturer, and Company in charge of the road construction.  All the Defendants disputed their liability.

north of Laguna Beach, when a 1985 Ford work van owned by Defendant Properties Corporation and driven by employee Juan O. (deceased) crossed the center line of the Pacific Coast Highway and hit Sally S’s vehicle virtually head-on.  The location of the incident was a construction zone.  A trench several hundred feet long had been dug by Defendant Constructors, Inc. on behalf of Defendant Gas Company.  The Gas Company required a trench for their lengthy project to replace several miles of gas line under the highway.   During the construction period metal “trench plates” were used to cover the trench, enabling the highway to still be used.

Witnesses to the incident stated that the Properties Corp. vehicle was driving southbound and got two wheels on the metal plates when it suddenly made “what appeared to be a left-hand turn where there was no place to make one.”  The vehicle crossed into the northbound traffic lanes where it struck the Plaintiff’s vehicle head-on.

Plaintiffs contended that the driver of the Olen vehicle was negligent in failing to control the vehicle on a rainy morning.  Plaintiff also contended that the roadway itself was a dangerous condition.  That contention is premised on the accumulation of factors such as the long line of metal trench plates, rainy weather, a downhill grade with a curve and speeds in excess of 50 miles per hour.  There was evidence that certain employees of the Construction Company felt that the land should be closed due to the rain or that the speed limit should have been reduced.  The lane, however, was not closed, nor was the speed limit reduced.  Plaintiff made further allegations that the trench plates themselves, when wet are too slick to be safe for roadway travel, particularly in long stretches on downhill grades with high speeds. 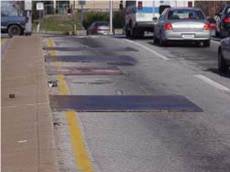 When calculating the damages Sally S. incurred, the Plaintiff gave evidence of her physical injury.  Sally S’s initial hospitalization lasted nineteen days.  During most of this time she suffered from mood and behavioral episodes due to her head injury and loss of consciousness.  Subsequently, Sally S. has suffered approximately ten further surgeries and hospitalizations.  Fortunately, she has been saved from having her lower leg amputated as a union of the tibia/fibula fracture has been achieved through the below referenced bone grafting/vascular surgeries.

In May of 1993, Sally S. underwent a fourteen hour surgery involving the removal of microvascular material and bone from her hip and placing it into her lower leg for purposes of achieving the union of the tibia/fibular fracture.  After that surgery, she suffered a bizarre complication due to a bacterial growth in her trachea.  This required her being ambulanced to U.C. San Diego Medical Center where a team of specialists performed emergency tracheal “stripping” (peeling off of bacterial scabbing inside of the trachea).

Yet another complication of infection put the entire potential for bone growth at risk several weeks later.  Sally S. also underwent a subacromial decompression surgery for shoulder pain as well as multiple heel surgeries to level out her gait and stance.  She still faces surgery on both knees.

Further estimations of Sally S’s damages entailed calculating her loss income due to the accident.  Sally S. had worked in the field of paper good sales and supplies for approximately thirteen years before the incident.  Her work history though the 1980’s evidenced the capacity to earn well in excess of $50,000.00 per year and by 1990 she had started her own full time business entitled AFS Packaging wherein she warehoused, brokered, and sold paper goods, packaging supplies, cardboard and corrugated paper supplies, bags, trash liners, etc. with a large client base.  As of the date of the incident, she had an income approaching $100,000.00 per year.

Testimony from Plaintiffs’ experts indicated that Sally S. was not able to return to her previous business endeavors, and that her probable future working capacity would be limited to four hours per day of sedentary, non-complex work (such as receptionist).  Her loss of earnings capacity, at 40 years old when the incident occurred, was estimated at $1,900,000.00.

Multiple liability defenses were raised by the different Defendants in response to Plaintiffs’ allegations.  Defendants Constructors, Inc., Gas Company, Shoring Co. and the State of California contended that the Olen vehicle went out of control because it was driving too fast for the conditions.  While Defendant Properties contended that the vehicle went out of control due to the dangerous condition of the roadway presented by the trench plates in the rainy weather.

INJURIES:  Sally S. suffered severe injury including: blunt head trauma, closed head trauma with cerebral concussion and remaining organic mood disorder, blurred vision, memory difficulty, speech difficulty, headaches, cardiac contusion, left jaw and neck hematoma; cervical sprain with numbness down trunk and into arms and fingertips; open tibula-fibula fracture of the right leg with non-union requiring initial bone grafting surgery, which failed, and a subsequent fourteen hour microvascular/bond graft surgery (wherein vascular and bone components from the hip were moved to the location of the tibula-fibula fracture and which required use of the external fixation device); right calcaneal (heel) fracture with approximately seventeen comminuted pieces requiring a remolded heel bone and also requiring a calcaneal-subtailor ankle fusion); multiple left rib fractures; bilateral knee cartilage damage due to the limp that she now walks with because of her injury; and multiple scars on her hip and leg due to bone grafting surgeries.

PLAINTIFF’S AGE:  40 at time of incident.