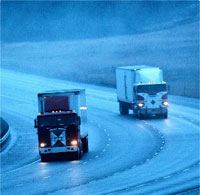 The recent tragic events surrounding the death of a well known optometrist in Anaheim Hills has re-focused the Orange County community on truck safety.

On March 8, 2001, a dump truck with attached trailer apparently lost its brakes traveling down Imperial Highway at the intersection of Nohl Ranch Road, in Anaheim Hills. Due to the brake failure and many additional factors now under investigation, the large truck ran a red light resulting in one fatality and several other injured parties. Three schools are in the immediate area and in addition there are serious school safety issues. Police investigation determined that 7 of the 8 brake assemblies on the large truck were either “out of adjustment or inoperable.” The Law Offices of Aitken * Aitken * Cohn appreciates, on behalf of the family, any information our readers might have about this tragic incident or other truck safety issues which are related.

About 5,000 people die each year in large truck crashes (85 per cent of the fatalities involve bystanders or other vehicles.)

Based on their numbers on the road and the amount they travel, large trucks (e.g. tractor trailers, single unit trucks) account for a great proportion of highway deaths. It has been recently estimated that about 5000 people die each year in large truck crashes and about 85% of them aren’t truck occupants. One out of eight traffic fatalities in 1999 resulted from a collision involving a large truck. As large trucks often weigh 20-30 times as much as passenger cars, the main problem is the vulnerability of people traveling in smaller vehicles/

Truck braking capability is a recurring safety issue in the trucking community. It has been determined that loaded tractor-trailers take 20-40 percent farther than cars to stop. Of a representative sample of trucks inspected as recently as 1996, 29 percent were ordered off the road because of serious vehicle defects, more than half of which were brake defects. Anti-lock brakes are now required on new tractors as of 1997 (new trailers as of 1998). Another recurring problem (featured in our Fall 2000 newsletter) is driver fatigue.

If you would like to support regulations designed to reduce the number of truck related incidents, contact CRASH (Citizens for Reliable and Safe Highways) at www.trucksafety.org, the Insurance Institute for Highway Safety at www.hwysafety.org or other like-minded consumer advocacy groups.