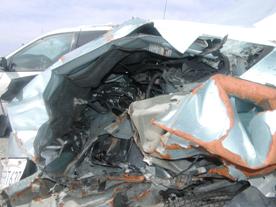 CASE DESCRIPTION: Plaintiffs Kimberly B., Ruby L. and Terry B., passengers in Kimberly B.’s vehicle brought a personal injury suit against Defendant Carl M.  Carl M. was traveling westbound in the eastbound lanes on US-50, therefore going the wrong way on the highway, against traffic.  As a result, Carl M. struck the front of the 2004 Honda Odyssey being driven by Kimberly B. causing his own death, serious and substantial injuries to the plaintiffs Kimberly B., and Ruby L. Terry B. ultimately sustained fatal injuries.

On January 27, 2007 close to 1:20 a.m. Kimberly B. was lawfully driving Ruby L. and Terry B. in her 2004 Honda Odyssey.  They were on their way home from visiting relatives in Orange, going eastbound on US-50 near Sacramento, California.  Without warning, they were struck head on by Defendant Carl M., an 87-year-old gentleman, who was traveling westbound in the eastbound lanes.  He was driving in the wrong direction on the highway and is indisputably liable for all economic and non-economic damages that come from this case.   After the ambulance reached the accident site Kimberly B. was airlifted to UC Davis Medical Center where she was hospitalized for 6 days.  Terry B. was also hospitalized at UC Davis Medical Center and Ms. L. was rushed to Mercy General Hospital and later transferred to UC Davis on the same day.  The defendant Carl M. died from the accident soon after.

INJURIES:
Terry B.
Mr. B. was transported from the scene of the accident by ambulance to UC Davis Medical Center, where he was hospitalized from the date of the accident until February 6, 2007.  Thereafter Terry was transferred to Emerald Gardens Nursing Center, a rehabilitation home, until March 23, 2007. As a result of the accident Terry B. suffered a laceration to the spleen and other internal complications.

Kimberly B.
Mrs. B. suffered a variety of injuries including, but not limited to, open reduction of left intertrochanteric hip fracture, intramedullary nailing of left femoral shaft fracture, closed reduction of right distal radius fracture, open reduction of right great toe MTP joint dislocation, right great toe MTP joint open reduction and pinning for unstable dislocation.  Her injuries required a lengthy hospitalization and rehabilitation. Kim had several surgeries due to the violent impact.  She was non weight bearing for months, had serial casting, and was confined to a walker. Kim was transferred to Emerald Gardens Nursing Center on February 1, 2007 for rehabilitation, wherein she remained until March 23, 2007.  Due to the severity of her fractures, they required hardware which remains an issue to this day.

Ruby L.
Mrs. L. sustained injuries including, but not limited to, Head Injury, Traumatic Pneumothorax, Acute Respiratory Failure, C6 Fracture, C7 Fracture, Pneumonia Infection/Pulmonary contusions, Airway Obstruction, Atrial Fibrillation, Contusion of the Lungs, Multiple Rib Fractures, Ventilator Dependence. Her injuries required a lengthy hospitalization and rehabilitation. Ms. Ruby L. was transported from the scene of the accident by ambulance to Mercy General Hospital and was later transferred to UC Davis on the same day.  She was hospitalized at UC Davis Medical Center from January 27, 2007 until February 6, 2007.  Upon discharge from UC Davis, Ms. L. was taken to Kaiser Hospital in Sacramento where she remained until mid April, 2007.   As a result of the accident Ms. L. received various traumatic injuries as noted above.  Ruby had a tracheotomy for over 2 months due to her collapsed lungs.