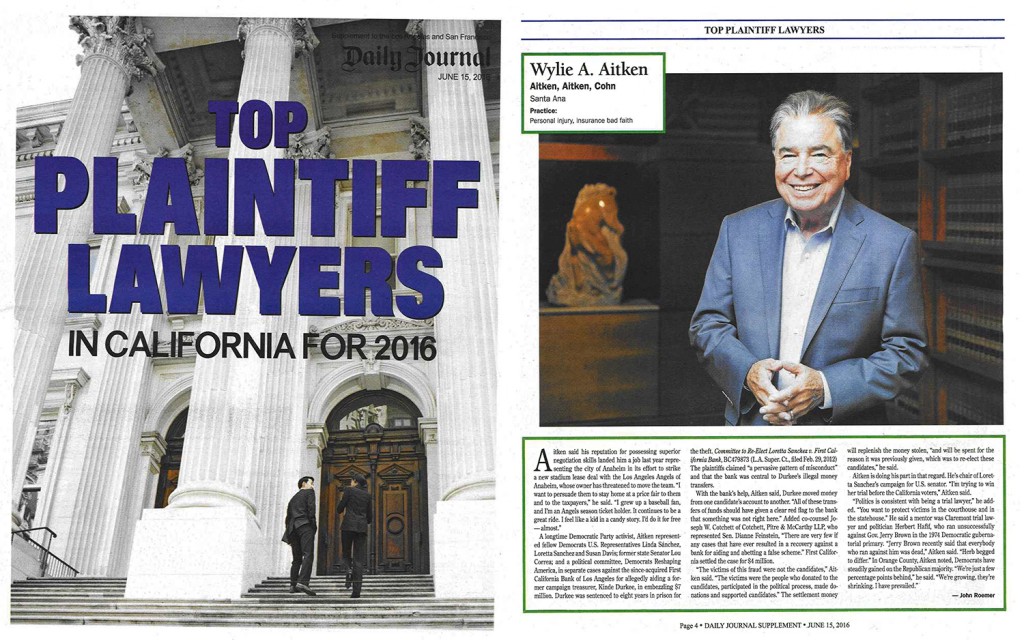 With an illustrious career as a trial attorney in the State of California, Wylie Aitken continues to be acknowledged for his extraordinary litigation skills and his beneficial contributions to society. Recognizing Wylie’s accomplishments, the Daily Journal has once again named Wylie as one of their Top 30 Plaintiffs Lawyers in all of California. Wylie was also included in last year’s inaugural supplement, where he shared his greatest achievement in life: being able to practice law alongside his daughter and two sons.

This year, the Daily Journal focused on Wylie’s involvement in politics and his ongoing role in promoting fair and just legal processes. One case in particular, Committee to Re-Elect Loretta Sanchez v. First California Bank, alleged that the First California Bank was central to aiding Sanchez’s former campaign treasurer, Kinde Durkee, in embezzling $7 million. “There are very few if any cases that have ever resulted in a recovery against a bank for aiding and abetting a false scheme.” First California settled the case for $4 million.

Wylie explained that he was not fighting for the candidates but instead for the people who participated in the political process by donating hard earned money to support candidates they believed in, just to have their money stolen.

Aitken Aitken Cohn is honored to be led by an attorney who continues to make headlines across the nation and congratulates all the fellow colleagues who appeared alongside him in this special supplement. Check out more of the awards that Wylie and the rest of the attorneys at Aitken Aitken have won this year and in the past here.