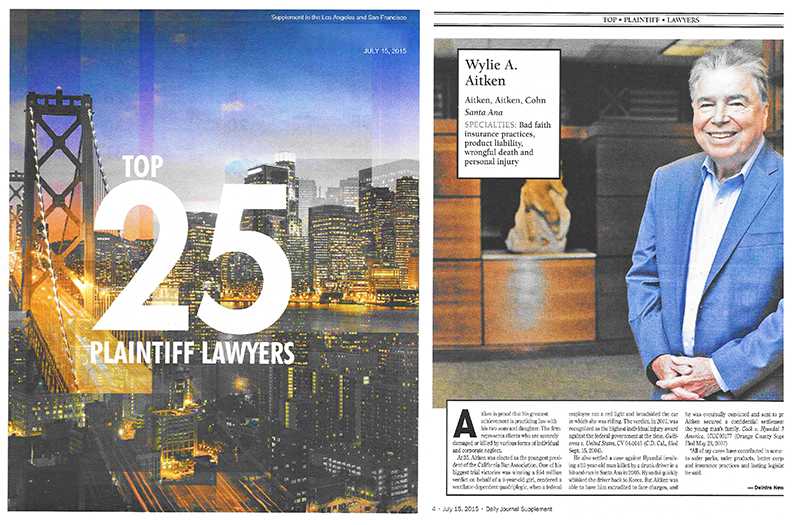 With thousands of exceptional, even legendary, plaintiff’s lawyers across California, what sets Wylie Aitken apart? “All my cases have contributed in some way to safer parks, safer products, better corporate and insurance practices and lasting legislation.”

AAC founding partner Wylie Aitken is no stranger when it comes to receiving recognition for his work; this year is no different. Last Wednesday, a leading Los Angeles newspaper scouted Wylie to be listed in their Top 25 Plaintiffs Lawyers in all of California.

The article was the first-ever of its kind for the newspaper, one in which Wylie shares that his greatest achievement in life is that he is able to practice law alongside his daughter and two sons. He is also asked about two of his significant cases. In one case, he secured a $54 million verdict on behalf of a 9-year-old girl who was rendered a ventilator-dependent quadriplegic after a federal employee ran a red light. The verdict was recognized as the highest individual injury award against the federal government. Another highly publicized case was one in which Wylie won a confidential settlement for the family of a man who was killed when a drunk Hyundai employee hit-and-run.

Aitken Aitken Cohn is privileged to be led by an attorney that continues to make headlines across the nation! Check out more of the awards that Wylie and the rest of the attorneys at Aitken Aitken have won this year and in years past.