Aitken Aitken & Cohn’s associate Atticus Wegman has recently been selected and honored by the Daily Journal’s Top 5 Associates to Watch list. The Daily Journal considers over 400 attorneys throughout California and selected the Top 5 whose dedication and excellence in the legal field have set them apart. The recipients were honored at an event held in Santa Monica featuring guest speaker, the U.S. Ambassador to Australia, Jeff Bleich. 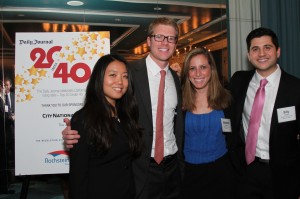 Atticus Wegman was born and raised in New Hampton, Iowa. He attended Fresno State University where he obtained his Bachelor of Arts degree, graduating magna cum laude. During college, Mr. Wegman was recognized for his advocacy skills and was awarded a scholarship to act as a representative of the California State University system. After college, Atticus attended Chapman University School of Law where he was a senior editor of a scholarly law journal and a member of the Mock Trial and Moot Court teams. He was also awarded a scholarship from the American Board of Trial Advocates (ABOTA) for demonstrating a strong interest in trial work, having strong written advocacy skills, and possessing strong oral advocacy skills. In 2010, Mr. Wegman became an associate at Aitken Aitken & Cohn. Atticus is a member of several legal organizations including the Orange County Trial Lawyers Association (OCTLA) where he serves as the youngest elected member of the Board of Directors. He was also named a Rising Star by Super Lawyers magazine in 2012 and 2013. Recently, he had an article entitled Cyberbullying and California’s Response published in the University of San Francisco Law Review.

AA&C is very proud to have such a distinguished attorney on the team and knows that he will have a bright and successful future. The Daily Journal’s Top 5 Associates to Watch was published on January 29th and you can read the article in the link below. Congratulations Atticus!