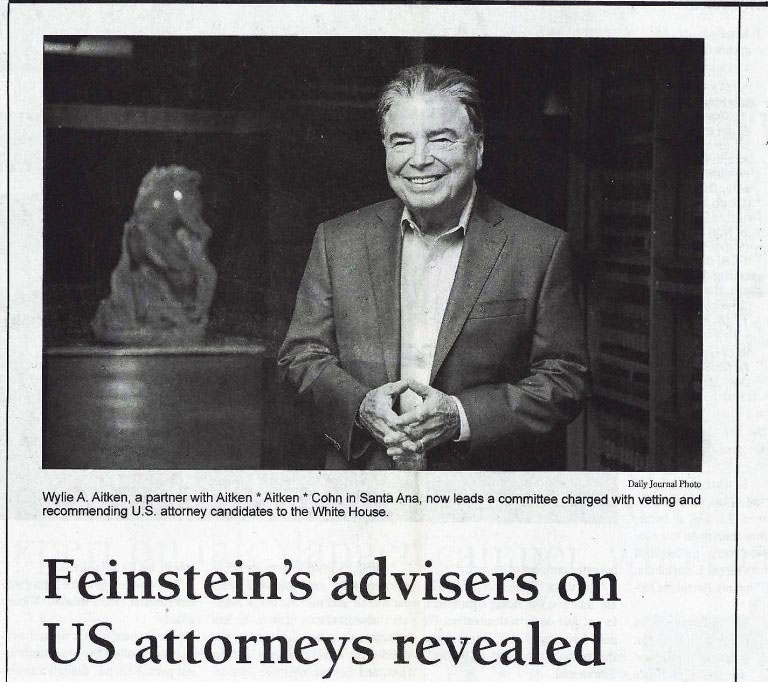 Founding Partner Wylie Aitken has been named Chair of the committee that screens and recommends U.S. Attorneys and federal judges to the White House. A leading California newspaper broke the exciting news, featuring Wylie on its front page of Monday’s publication, after the Office of California Senator Diane Feinstein released the names of the 22 attorneys and judges that comprise the bi-partisan, judicial selection committee last Thursday.

In addition to vetting candidates for the U.S. Attorney positions in California’s four federal districts, the committee is also responsible for screening individuals applying for federal judicial vacancies. This is the first time, since former President Obama’s first term, that the makeup of the committee has been made public.

This major appointment comes on the heels of a long string of honors that Wylie has received. Earlier this year, Wylie was inducted into the Irish Legal 100 for the eighth year in a row as well as the LawDragon Hall of Fame, an honor reserved for only 50 attorneys throughout the nation. Read more about these accomplishments here.

Last month, Wylie was the featured guest on Inside OC with Rick Reiff’s 500th episode, where he spoke about a variety of topics including politics, the importance of education, as well as how Aitken Aitken Cohn came to be what it is today. Watch the entire 2-part video here.

We congratulate Wylie on this new appointment, and are confident that he will continue to elevate the level of integrity and commitment needed to aid in appointing the next generation of U.S. Attorneys and federal judges!